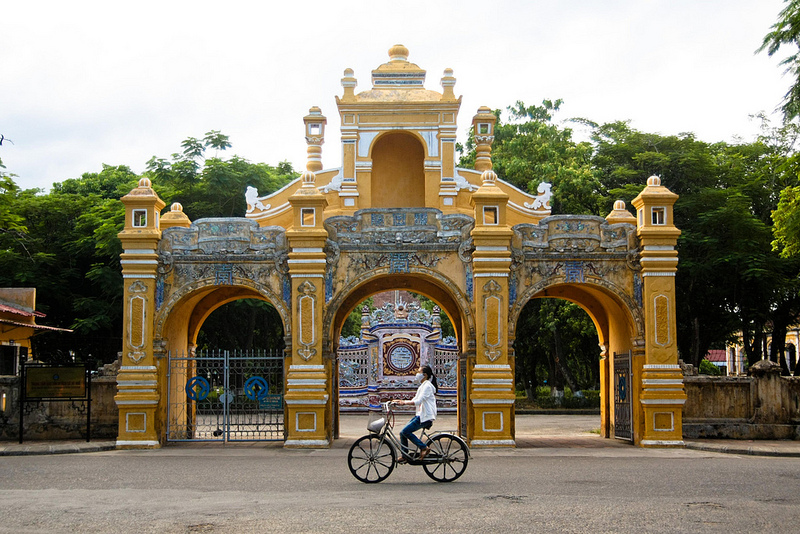 Huế (pronounced hway–not hue, as in a gradation of colors, as I so gracefully referred to it when inquiring to the hotel receptionist in Hanoi about the train. Oops.) is a small city right smack dab in the center of Vietnam’s coastline.

The historical center of Huế is roughly a square surrounded by walls and a moat. Within the walls, just north of the Perfume River, is a walled citadel, with yet another moat around that.  Huế was the political capital from 1802-1945. The 13 emperors of the  Nguyễn who ruled have their monumental tombs scattered about the area of Huế, which is one of major attractions of the area apart from the citadel.

The wall around the old city and one of its gates.

Huế has an interesting layout as far as the touristy set-up goes. Inside the old walls there isn’t much to see apart from the citadel, and almost all of the accommodations, tourist restaurants, souvenir shops, and travel agencies are located in a cluster just south of the river. Unlike most cities where the historical center tends to be the most touristy, and therefore less authentic, Huế seems to be preserved a bit more as it was traditionally.

I rented a bicycle for $1 (ahh, the freedom!) and rode up and down the streets and narrow alleyways observing daily life in Huế without another tourist in sight. It was kind of refreshing, actually. Of course, because I was on a bike and passing things rather quickly, there aren’t as many photos to show for the day, especially of the less monumental variety, though I did manage to stop the bike to take a few shots.

For my second day in Huế I booked a bus tour to see some of the tombs of the 13 emperors. I generally to hate doing organized tours, even for a day trip. They tend to be too long cramming too much in (I feel they do this to have many sights to list on the brochure making the tour sound more interesting), you’re forced to be with a big group of people not of your choosing, and there isn’t nearly enough time for relaxing and lounging in cafes as I would prefer.

This tour was no exception and it actually went an hour over the stated return time, which people who had buses to catch and had been assured they would be back in plenty of time for were not happy about at all. I wasn’t so happy either as I was exhausted by the late afternoon and the last activity was an hour-and-a-half-long boat ride that had almost everyone on the tour (including me) conked out for the duration of the tour.

Still, the tour was a necessary evil as it was pretty much the only way to see a number of tombs since they were all well outside of the city walls, however we did see some really neat looking tombs and temples.

Why I hate handing my camera off to someone to take my picture: Exhibit A.

← “This is the Asia we dreamed of from afar.”
Hoi An: Touristy, Yet Charming Nonetheless →

5 Comments on “Huế : Temples and Tombs”